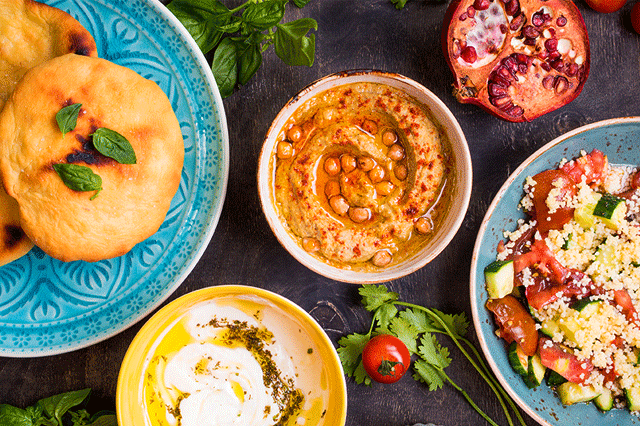 Discover the delicious sensations that come with middle eastern cuisine and experience halal dishes as you’ve never experienced them before.

The popularity of middle eastern cuisine has skyrocketed as more people are starting to become open to certain ingredients, spices, and colorful dishes that make this cuisine all the more unique. Hummus, pita, and falafels have been known to draw in a crowd but there’s more to halal food that manages to bring its own brand of rich aroma and savory flavors that compliment the spices found in each dish. Not all middle eastern dishes are made equal and we’ve managed to scrounge a small summary of different middle eastern regions and the kind of food you’ll find, each one steeped in culture and tradition:

The cuisine found in Syria includes fresh ingredients such as eggplant, lamb or mutton, and rice. It doesn’t come as a shock that Syrian modern dining has introduced a selection of appetizers called Mezze which is typically served with tantalizing Arabic bread before every main course. The appetizer in question includes dishes such as Hummus, Tabbouleh, and even Moussaka.

Whole grains, fruits, vegetables, fresh fish, and seafood, this cuisine focuses not only on how colorful and rich it is but on being healthy and mouth-wateringly delicious which makes it one of the perfect homages to middle eastern culture and cuisine. You’ll find that poultry is a lot more common than meat but that doesn’t mean that you won’t find the occasional lamb and goat meat in a couple of their dishes. They like to season their cuisine with large amounts of garlic, olive oil, and lemon juice. A popular dish from this country that you may have heard about is Baba Ganoush, Falafel, and Shawarma.

Known for its sublime combinations of rice, halal meat, vegetable, and nuts this cuisine is rich with herbs like raisins, pomegranates, and plums which are perfect for batch cooking. The kind of spices and flavors you’ll be able to taste and smell is not limited to the following: cinnamon, turmeric, and parsley. Iranian dishes are exceptionally diverse, mixing flavors like sweet and sour, or mild and spicy.

The most common dishes that you’ll find in Yemen contain either lamb or chicken which are often served with fenugreek ground, coriander, leek, apples, figs, citrus, potatoes, rice, and other kinds of fresh vegetables. Their national dish is Saltah which is a hearty stew that is usually eaten during lunch and can be prepared with or without meat. Sounds amazing, doesn’t it? Now, you can just imagine the kind of delicious middle eastern cuisine that awaits your taste buds.

Middle eastern food has intricate recipes that don’t always include hummus and baklava isn’t the only dessert. There are so many great dishes that you have yet to discover and all you need is the right recipe or the right people to serve you quality flavor-packed dishes. Do you find yourself hungry for more dishes that the middle eastern culture has to offer? Well, fret not because we here at Shibam Restaurant have the skills and techniques to cook up authentic halal dishes that will leave you hungry for more. Contact us today to get a taste of Yemeni dishes in Chicago without having to book a plane ticket to Yemen.