Views of Yemen: Geography and Topography 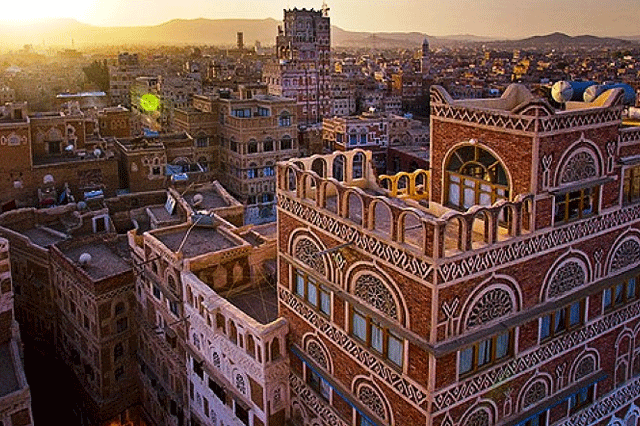 Where in the World is Yemen?

A global superpower of the ancient world, people have occupied the Yemeni region since 5000 BC. Impressively, the country’s Great Dam of Marib — constructed in 940 BC by the Sabaean people to manage seasonal flash floods in the valley — is considered one of the engineering wonders of the ancient world.

Once the crossroad between eastern and western cultures, Yemen occupies the southeastern edge of the Arabian Peninsula. The country is 203,850 square miles and enjoys a 1,200-mile-long coastline. Saudi Arabia borders Yemen to the north, the Red Sea is to the west, the Gulf of Aden is to the south, and Oman and the Arabian Sea is to the east.

Today, the waters around Yemen remain some of the most active shipping lanes in the world, with Bab-el-Mandeb Strait linking the Red Sea and the Indian Ocean via the Gulf of Aden.

Yemen Geography: A Smorgasbord of Regions

Six venting volcanoes serve as the region’s spine, from the city of Aden to the island of Perim, a crab-shaped landmass off the southwest coast of Yemen. A prehistoric volcanic explosion formed Perim, and geologists believe it was once connected to the mainland but separated at some point.

Socotra, the largest island in the Arab world, is also a part of Yemen. Though culturally and politically Yemeni, Socotra is geographically part of Africa, making it one of the very few transcontinental lands in the world.

The entire island is a UNESCO World Heritage site on account of its spectacular range of flora and fauna. Over 700 species of plants and animals are endemic to the island, meaning they’re not indigenous to any other region on the planet. Its biodiversity is so otherworldly that scientists jokingly call Socotra “the most alien-looking place on Earth.”

Highlands, Coastal Plains, and Desert on the Mainland

Mainland Yemen is divided into several distinct sections. The nation’s mountainous central region is wreathed by coastal plains to the east, west, and south, as well as a desert to the north along the Saudi Arabian border.

Yemen doesn’t have any permanent rivers, but the wadis, or river valleys, fill during rainy seasons. Generally speaking, much of the country is at a high elevation. The highest peak in Yemen and the second-highest in the Arab world, Jabal An-Nabi Shu’ayb, stands at 12,028 feet above sea level.

The country’s northeastern quadrant is part of the “Empty Quarter,” the largest sand expanse in the world that spans several countries. Conversely, the western highlands are wet and serve as the agricultural heart of Yemen, where farmers grow sorghum, coffee, tropical fruits, and various grains.

Over the centuries, Yemen’s topography has isolated communities from one another. After all, it’s not easy to travel from the mountainous highlands to the tropical islands. As a result, each section of the country has developed a distinct cultural spin that extends to food preparation and tastes.

Take, for example, saltah, Yemen’s national dish. It’s made with meat, fenugreek froth, and a mix of chili peppers, tomatoes, and garlic. However, regional variations on the meal may include eggs, potatoes, vegetables, or rice.

Yemeni meals seldom call for dairy products. However, cooks from agricultural communities make generous use of buttermilk since they have access to milking animals.

Broadly generalizing, Ottoman culinary influences dominate dishes from northern regions. In the south, Indian spices and techniques are prevalent. Perhaps, however, the most important thing to remember about Yemeni culture is that food offerings are considered an honor, and refusing them is considered rude.

There’s only one way to find out if you like Yemeni food: try it! That’s where Shibam Yemeni Kitchen comes in. With four locations around Chicago, Shibam is an instant favorite.

So if you’re looking to try something different for dinner, find your way to Shibam Yemeni Kitchen tonight. Eat at the restaurant or opt for take-out, the choice is yours!