The Jambiya: A symbolic sword 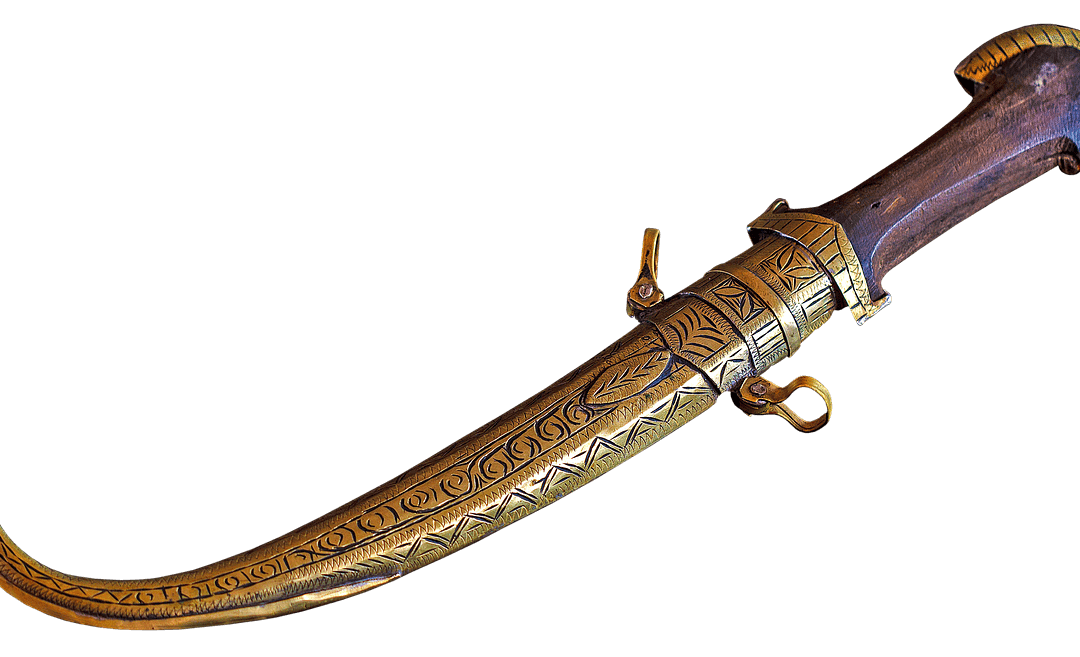 It is not uncommon to see men and male teenagers alike in Yemen sporting daggers on full display.

Perhaps due to a striking contrast to western life in the 21st Century, one may be surprised to learn that daggers are always at hand in Yemen. Dressed in traditional Yemeni clothing (article: Yemeni clothing), on the front of their waists these daggers are clearly visible to anyone who walks by. This front and center display is fitting, as these daggers, known as the traditional Arabian Jambiyas, were once tools of labor and defense but are now a symbolic representation of status and manhood. In fact, it is the handle of the weapon that announces the prestige of the man who proudly displays it.

Historically, the people of Yemen were largely split into two classes. A man’s class status could easily be unveiled by the type and make of Jambiya he wore. For the wealthy, prominent, and high-in-stature, these Jambiya daggers were engineered with the utmost craftsmanship of the time. Each piece that assembled the weapon was carefully thought out, arranged, and designed to be worn by someone great, using materials such as Rhinoceros horns, or rare stones. Amongst the Yemeni people, the Jambiya daggers that belonged to the aristocratic and chieftain men such as this were often referred to as “Tuza.” The Jambiya belonging to ordinary townspeople and tradesmen were otherwise known as “‘asib.”

It was not until post-1962 when the use and meaning of the different Jambiyas began to shift. It was the Revolution of 1962 that overthrew the official ways of the past and abolished historical classism. Before this, Jambiyas were often used as weapons for combat and defense. Today, Jambiyas are no longer tools to separate the Yemeni people from one another. While it is true that Jambiyas are often still distinguishable by the wealth of their owners, beyond this, these daggers have grown to symbolize a shared understanding to appreciate the customs of what once was. These relics are ceremonial tokens that unite the Yemeni in a shared history and appreciation for the past.

The spread of western culture has not left Yemen unaffected. Though the prevalence of the Jambiya is not what it once was, it still exists as a prolific window to the customs of the past. If one were to walk the streets of Yemen today and perhaps stop at a Yemeni restaurant or tea house, one might witness a traditional exchange between men and their Jambiya. In many dances, the men will reach for their Jambiyas and move, cross, and sway their blades in a swift and synchronized movements.

Like those who appreciate the cultural value that Jambiyas stand for, the Shibam Yemeni Kitchen places great importance in honoring Yemeni culture. Through traditional cuisine, customs, decor, and socializing, The Shibam Yemeni Kitchen authentically depicts the culture the Yemeni people hold on to. Find a location near you, or order online for a flavor experience unlike any you’ve had.